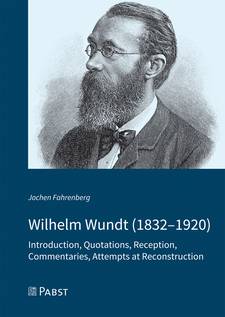 For orders outside the EU we have to charge the applicable customs fees additonally.

Wundt’s conception of psychology emerged during many decades of research and teaching, which led him from neurophysiology to psychology and philosophy. He thus established a unique, interdisciplinary, and comprehensive theoretical horizon not attained by any psychologist after him: Sensory psychology, neuropsychology, psychophysiology, animal psychology, general psychology, cultural psychology, ethics, epistemology, methodology, and philosophy. To elaborate a developmental theory of mind, which, for instance, seeks access to the genesis of thinking via the development of language, can be considered a central guiding idea in Wundt’s entire work. General psychology and cultural psychology (“Völkerpsychologie”) share a common basis in Wundt’s theory of apperception. In a generalized sense, apperception is an integrative process in which sensory impressions, feelings, and volitional activity are not just processed, but integrated and creatively synthesized. This process is dynamically influenced by the individual’s active aspiration, i.e. primarily by motives and not by cognitive control systems.

Wundt also developed the first genuine theory of science and methodology with respect to empirical psychology. His conception includes a multimethod approach, i.e. a competence for experimentation, as well as qualitative comparison and interpretation (hermeneutics). – When one-sided views become temporarily attractive in the mainstream of psychology – be it cognitivism or neurophysiological reductionism, computer-based modelling, psychoanalysis, phenomenological orientation, the narrative turn or the socio-critical new psychology – it is worth recalling the theoretical horizon of the founder of psychology as a discipline. Wundt encouraged psychologists to conceive of a coordinated strategy, referring to the distinct categories and principles valid for mental science and for natural science in order to assess the human being as a psycho-physical unit. Here, he argued during the founding phase of psychology with a high degree of meta-scientific reflection, which can still provide an impetus for current research.

Wundt’s conception has remained attractive because of its integrative foundation and comprehensiveness of his conception, particularly since controversies persist about the aims and methods of psychology and about shifting currents within prevalent theoretical orientations, as well as actual splits into subdivisions and highly specialized professional associations. Such developments demand continuous discourse about the controversies in theoretical psychology. This includes the critical philosophical reflection of one’s own presuppositions, and the ability and willingness to reverse perspectives systematically, especially in psychology, academic studies, research, and professional practice.

Jochen Fahrenberg studied psychology, philosophy, and sociology at universities in Freiburg, London, and Hamburg. He received his PhD from Freiburg in 1962 and subsequently served as a post-doctoral research assistant at the Cardiology Clinic in Bad Oeynhausen. Assistant at the Institute for Psychology, University of Freiburg1963, Habilitation 1966. Together with Dr. med. Michael Myrtek, he established the Psychophysiology Research Group at the University of Freiburg with financing by the Volkswagen Foundation (1970–1974). He also served as Chair of Psychology (1973–2002) at the University of Freiburg and became an emeritus professor in 2002. Fields of research and teaching include psychophysiology, ambulatory assessment, methodology and theory of science, differential psychology, personality research, and psychological anthropology.

Publications and research data can be found at www.jochen-fahrenberg.de and PsyDok ZPID
http://psydok.psycharchives.de/jochen.fahrenberg@psychologie.uni-freiburg.de