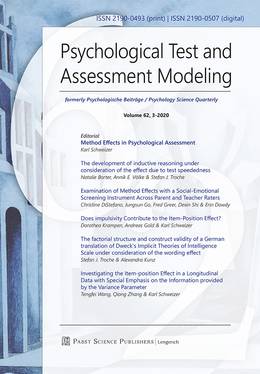 Professor Dr. Karl Schweizer and colleagues discuss statistical methods for the identification and control of method effects in "Psychological Test and Assessment Modeling". Special emphasis is given to the item-position, speed effect, wording effect.

The recently soaring interest in the item-position effect can be ascribed to the availability of statistical models with an enhanced capability for investigating the substructure data.

The speed effect is observed, if participants have not enough time for completing all items. The first attempt to control the influence of speededness on the outcome seemed to have been the distinction of power and speeded testing . Since virtually all performance measures are applied with a time limit in testing, it is rather likely that at least a few participants reach not all items in data collection. The not-reached items impair the validity of data.

The wording effect appears to originate from the advice to vary the wording of the items. Tis advice was given to test constructors because it was feared that otherwise participants would cease in reading the items carefully and resort to a schematic response style instead. The consequence of varying the item wording was an increased degree of heterogeneity in the responses. Investigations of the homogeneity of scales including equal numbers of positively and negatively worded items revealed a decrease of homogeneity due to the change of wording. The detection of the change in item wording as a source of decreased homogeneity has provided the inspiration for the denotation as item wording effect. This effect is also open to ex post investigations by advanced structural equation models.