Anton Fedoseyev, a 21-year-old from Russia’s Leningrad region, died near Kharkiv in May 2022. Fedoseyev was born with a birth defect that affected his face and had long dreamed of getting plastic surgery. He signed a contract with the army to earn money to pay for the operation. He spoke to Sever Realii, a division of Radio Free Europe/Radio Liberty, before his death. 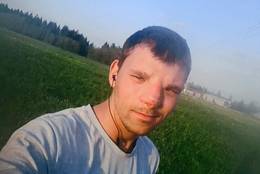 According to Sever Realii, Fedoseyev grew up in a large family in the village of Bolshoy Sabsk in the Leningrad region’s Volosovsky District. He had two brothers and one sister. After his father died in 2004, his mother raised the children alone. During his school years, he spent two years in a social services center for children with “difficult life situations” after his mother started drinking. According to teachers who worked at the center at the time, Fedoseyev stood out from the other children: he “was very responsible and a great student.” He never resorted to violence and always tried to resolve other students’ conflicts, the teachers told Sever Realii.

When Anton was born, his umbilical cord became wrapped around his face; doctors had to perform immediate surgery to save his life, leaving him with a defect on his nose. According to Sever Realii, he was embarrassed by his appearance and dreamed of getting plastic surgery “to make his nose look like everyone else’s” — but there was no way to earn enough money in his village.

In the summer of 2020, after graduating from technical school, where he studied to be a tractor operator, Fedoseyev received a draft notice from his local enlistment office. After serving his mandatory military service, he signed a contract to stay in the army. According to his sister, Alyona, becoming a contract soldier was the only feasible way for him to earn enough money for his surgery.

On local farms, they don’t really pay anything, and they withhold your money. Of course he was looking for some kind of stability — that’s why he signed the contract, despite us all trying to talk him out of it. When they offered to take him out of the country, as I understand it, he could still decline. But he always said, “I’m not a coward.” And he agreed to go.

According to Fedoseyev’s sister, in early May, he called her to tell her about the good money he was making and how he would be able to use it to help their mother. On May 19, he died after coming under artillery fire in Ukraine’s Kharkiv region. According to Sever Realii, Fedoseyev was brought home in a zinc coffin with a small window through which his face was visible. He was buried on May 25.