The pursuit of drugs is not only to be found among humans, but across different species. The desire for drugs is a fourth drive, alongside hunger, thirst, sex. What are motivations from the perspective of users and experts? Zsuzsa Kalo and colleagues try to give different answers, published in a new reader: "Why? Explanations for drug use and drug dealing in social drug research". 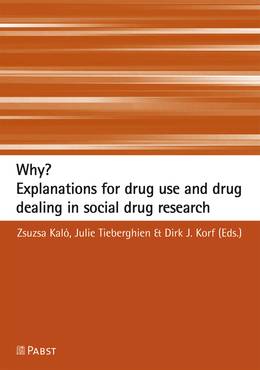 Alfred Springer notes: "A special feature of the new shape of the discourse on the meaning of drug use is its insistence on human rights aspects of drug use and drug users. This position contributes to a renewed loosening of the boundaries between medical and social use. A discourse has been opened that contains visions of responsible use of drugs, the liberalisation of self-medication and self-enhancing pharmaceutical technologies. At the same time, initiatives concerning the liberation of responsible use of cognitive-enhancing drugs by the healthy have been started from a neuroethic perspective. This new discursive frame prepares the possibility of new and improved motivations for non-medical drug use. In such cases users really have the chance to decide about the safe use of known and well-researched drugs for self-defined aims within their search for their private ideal drug.

Such a situation implies some challenges for the control framework. Like all new technologies, cognitive enhancement can be used well or poorly. One must think about the problems that such use of drugs could create or exacerbate. With this, as with other technologies, we need to think and work hard to maximise its benefits and minimise its harms. Probably the ideas of control that are generated in that context could help to move on to develop a general realistic and rational control system for the implementation of the concept of responsible use. It allows the understanding that user, controller, dealer, doctor, prevention worker, researcher and scientist are all characters within a common space, on the neurocultural stage, in need of an understanding and integrating director ..."

Eric Sigel describes: "Drug intoxication allows animals to be in a different state, to act differently and to feel different. After sampling the numbing nectar of certain orchids, bees drop to the ground in temporary stupor, then weave back for more. Birds gorge themselves on inebriating berries, then fly with reckless abandon. Cats eagerly sniff aromatic pleasure plants, then play with imaginary objects. Cows that browse special range weeds will twitch, shake and stumple back to the plants for more ..."