The moment a person dies, their body begins to break down as cells wither and bacteria invade. But how long does it take for a body to fully decompose? Although the process of decomposition starts within minutes of death, there are a number of variables, including the ambient temperature, soil acidity and coffin materials, which can affect how long it takes a body to skeletonize. However, on average, a body buried within a typical coffin usually starts to break down within a year, but takes up to a decade to fully decompose, leaving only the skeleton, Daniel Wescott, director of the Forensic Anthropology Center at Texas State University, told Live Science. 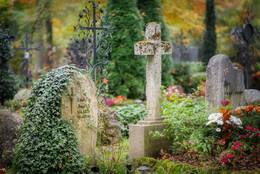 How long does it take for human remains interred in coffins to decompose? What if the body is embalmed?

A body buried without a coffin, which doesn't have protection from insects and other elements, typically skeletonizes within five years, according to Nicholas Passalacqua, an associate professor at the Forensic Osteology Research Station at Western Carolina University.

Decomposition itself is fairly straightforward. Once death occurs and oxygenated blood stops flowing, cells die; in a process called autolysis, cells release enzymes (especially those from the lysosomes, which contain digestive enzymes), which break down the cells themselves, as well as carbohydrates and proteins, according to "The Cell: A Molecular Approach," (Sinauer Associates, 2000).

Putrefaction, or the decomposition of organic matter without oxygen by bacteria, fungi or other organisms, can turn parts of a body's skin green about 18 hours after death, according to the book "Evaluation of Postmortem Changes" (StatPearls Publishing, 2022). This occurs simultaneously as bacteria in the abdomen rapidly multiply, creating gases that cause the body to bloat and smell. Putrefaction speeds up when the body is in a hot environment, which is why human remains are often kept in refrigerators until it's time for burial.

During this bloating stage, the skin can slip and blister and marbling can occur, in which greenish-black blood vessels can be seen through the skin within about 24 to 48 hours of death, according to "Evaluation of Postmortem Change." Eventually, the bloat collapses, and in a process known as black putrefaction, the body's organs and tissues soften, and life forms such as insects and microbes eat the remaining soft tissues, leaving the skeletal remains.

"Decomposition significantly slows down at this [skeletal] stage, and it takes years or decades for the skeletal remains to disintegrate," according to "Evaluation of Postmortem Changes."

To delay decay, embalmers can drain the blood and other fluids from a corpse and replace it with embalming fluids they inject into the veins. These chemicals, which act as preservatives, stop the bacterial activity that breaks down the body. Although embalming is a common practice, some religions forbid it because it is considered a desecration of the body.

"If they're embalmed, it can really change things," Wescott told Live Science.

As an example, he pointed to the case of slain civil rights leader Medgar Evers, who was buried in 1963 after being embalmed. When his body was exhumed for evidence in a 1991 murder trial, Wescott said, "his body was so well preserved that they let his son in to see him."

For those who are embalmed and buried in a coffin, five to 10 years is a more typical decomposition timeline, he said. At that point, the tissue is gone and only bones remain.

The quality of the embalming job also plays a role, Wescott said. When he exhumed an embalmed body buried 15 years before exhumation, he discovered that it had skeletonized in part because the coffin had broken down. Another embalmed body he exhumed had been buried only a year, and "she looked like she just died, but had some mold growing on her," he recalled.

Location can have an impact, too. If a casket is buried in acidic soil, it will erode faster, exposing the body to the elements, including insects, which abet the decomposition process.

There are a few other factors most people don't think about, Wescott said. In an outdoor setting, obese people initially decompose more rapidly in the beginning, but slow down compared with others later in the process because maggots prefer muscle tissue over fat. Chemotherapy and antibiotics used prior to death also can have a huge impact on decay, because both kill off some of the bacteria involved in the process.

As odd as it sounds, the coffin's liner might also have an influence on the pace of decomposition, Wescott said. Some materials wick fluid away from the body and could cause it to dry out, and even mummify more quickly. If the material holds moisture, the body could become soaked in its own fluids and decompose more quickly.