On the evening of June 17, President Volodymyr Zelensky announced that Ukrainian paramedic Yulia “Taira” Paevska had been released from Russian captivity. Paevska has long been hailed as a hero in Ukraine, known for saving hundreds of lives as a volunteer medic in the Donbas. At the beginning of Russia’s full-scale invasion of Ukraine, Paevska spent more than two weeks evacuating the wounded in besieged Mariupol (the harrowing footage from her body camera was later published by the Associated Press). After Russian troops captured Paevska on March 16, pro-Kremlin media began smearing her as a “Nazi” and accusing her of terrible crimes. As a result, news of Paevska’s release sent the rumor churning once again as pro-Kremlin bloggers wondered how it was even possible for Russia to let her go. 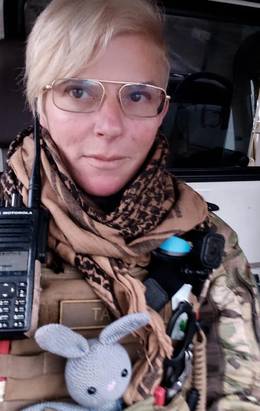 ‘Taira’ and her angels

According to a profile by The New Voice of Ukraine, Yulia Paevska was born in Kyiv in 1968. A graduate of Ukraine’s National University of Physical Education and Sports, she taught the martial art Aikido for more than 20 years, while working as a designer. Paevska rose to prominence in 2014, after becoming a paramedic during the Maidan Revolution. After the war broke out in eastern Ukraine, she became a tactical medical instructor at the request of a friend, and then went to the Donbas as a volunteer medic.

While working in the Donbas, Paevska (call sign Taira) trained thousands of people in tactical medicine and became the leader of a volunteer medical evacuation team called “Taira’s Angels.” By 2018, Taira’s Angels had reportedly saved some 400 lives. That same year, Paevska won medals for archery and swimming at the Invictus Games for Ukraine. She then went on to serve in the Ukrainian Armed Forces, leading the evacuation unit of a mobile hospital in Mariupol. After she was demobilized in 2020, Paevska continued working as a volunteer.

Paevska’s husband, Vadim Puzanov, told RFE/RL that a few days before Russia began its full-scale invasion of Ukraine, Paevska headed to Berdianske — a village near Mariupol where Taira’s Angels is based. Once the war began, Paevska spent more than two weeks evacuating the wounded in besieged Mariupol.

Meduza was unable to find any significant mention of Yulia Paevska in the Russian press prior to when she was taken prisoner. After she was captured, however, pro-Kremlin media immediately began smearing her as a “Ukrainian Nazi” and a “criminal.”

On March 27, NTV aired a segment that portrayed Paevska as a monster, claiming that her work as a medic was a cover for espionage and implicating her in human organ trafficking. The segment included a number of clips from a forced interview with Paevska, where some of the dialogue appears to have been spliced together.

NTV also alleged that Paevska was captured while trying to escape Mariupol in disguise, and that she had two “children whose parents had been killed” with her. The television channel hinted that Paevska could have been involved in the parents’ purported deaths. (Later, pro-Kremlin media outlets such as Pravda.ru and Life began directly accusing Paevska of murder.)

In the forced interview with NTV, Paevska states that she was trying to evacuate two orphaned children from Mariupol to Zaporizhzhia, along with other women and children. She also said that she planned to return to Mariupol afterwards. Similarly, Paevska’s husband told journalists that she was trying to evacuate women and children from Mariupol via a humanitarian corridor opened by Russian troops.

“There’s no sense in explaining how crude the propaganda and lies are,” Vadim Puzanov said about the segment on NTV.

“Why [was Paevska] in civilian clothes? She’s a civilian, so she should be in civilian clothes. Why someone else’s clothes? This is yet another method of propaganda. That is, the main thing is to dehumanize the person, and then provoke a feeling of disgust towards them, accusing them of anything, no matter how unfounded.”

On the evening of June 17, Ukrainian President Volodymyr Zelensky announced that “Taira” was “already home” and thanked those who made her return possible. A few days later, Paevska released a video statement of her own. “Everyone who is on the other side knows that everything will work out, that they’ll all be home, as I am home now. Thank you,” she said.

Later, on June 20, Paevska wrote on Facebook that her weight had dropped to 50 kilograms (110 pounds) while she was in captivity and that the conditions of detention resembled a concentration camp.

The news of Paevska’s release sent the pro-Kremlin rumor mill into overdrive. On June 18, Channel One reporter Irina Kuksenkova repeatedly insisted that Taira was still in captivity. In turn, Daniil Bezsonov, an official from the Kremlin-controlled “Donetsk People’s Republic,” claimed that Paevska had been exchanged “for very serious guys of ours,” while the pro-Kremlin Telegram channel VChK-OGPU alleged that she was swapped for a “high-ranking commander from Chechnya.”

Channel One’s Kuksenkova then began claiming that Paevska was released as part of a “corrupt scheme” in which “Isa Khachukaev and Murad Saidov rescued Adam Muradovich Gritsenko (the latter’s son) who was detained in Ukraine.” According to Chechen media reports, Isa Khachukaev is Chechen leader Ramzan Kadyrov’s envoy to the Crimea and Murad Saidov is his deputy.

Kadyrov refuted Kuksenkova’s claims about Gritsenko on June 20, publishing a video of Saidov stating that his son “is still in captivity” (he also said that Gritsenko holds Ukrainian citizenship). Kuksenkova later wrote on Telegram that she was contacted by Chechnya’s information minister, who insisted that neither Khachukaev nor Saidov had anything to do with Paevska’s release. “But my sources, with whom I have worked for 20 years, continue to stand their ground and claim that the deputy head of Ukraine’s Main Intelligence Directorate, Colonel Dmitry Usov, handled the issue of Adam Gritsenko,” Kuksenkova added. “Allegedly, he released Gritsenko from custody in Zaporizhzhia after Taira ended up in Ukraine.”

Adam Gritsenko was interviewed by Ukrainian blogger Volodymyr Zolkin back in April. During the interview, Gritsenko denied allegations that he had been abducted by Ukraine’s Security Service, saying that he was detained by Ukrainian law enforcement and moved to a safe place due to concerns that he may be killed.

Other pro-Kremlin bloggers were bewildered and disappointed at the very fact that Paevska was returned to Ukraine, as well as due to the murky circumstances surrounding her release. “Why was it necessary to initially throw in that she’s accused of killing the parents of two Mariupol children?” wondered Komsomolskaya Pravda’s Dmitry Steshin, who published these allegations on his Telegram channel in late May. In turn, Irina Kuksenkova reported that there were “big showdowns” in the DNR over the “criminal transfer of Taira to Ukraine.”

Ukrainian officials have yet to confirm who was handed over to Russia to secure Paevska’s release.