Every year, hundreds of thousands of Ukrainians are diagnosed with cancer — and for years, the Ukrainian healthcare system has done fairly well at treating them. Since the war began, however, Ukraine’s medical centers have been overwhelmed by the war-wounded, leaving them with little capacity for cancer patients. While international organizations have mobilized to evacuate juvenile cancer patients quickly and efficiently, adults with the disease have frequently had to fend for themselves. Meanwhile, neighboring countries are worried about their own health care systems being overwhelmed by Ukrainian patients. 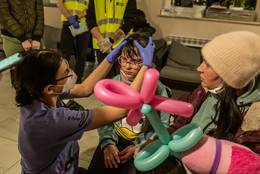 A nine-year-old patient and her mother at The Unicorn Clinic in Poland. March 31, 2022 (Oksana Parafeniuk / Getty Images for The Washington Post)

A sudden strain on the system

As of February 24, hundreds of thousands of Ukrainians were receiving treatment for cancer. It’s difficult to determine an exact number, but it’s undoubtedly huge; 163 thousand people in Ukraine were diagnosed with the disease in 2020 alone. All of them require treatment.

Like everything in Ukraine, healthcare has changed dramatically in the last two months. Cancer treatment has become much scarcer — and where it is available, it’s often incomplete. By some estimates, a full third of cancer treatment centers are currently unable to provide care. According to a representative from Ukraine’s Health Ministry who spoke at a WHO conference on April 26 and a WHO representative, cancer treatment is simply not one of the country’s priorities; medical resources are going first and foremost to people with war-related wounds and infectious diseases. Several humanitarian organizations have reported having the same hierarchy of priorities. On the other hand, some cancer treatment is still being administered, even in areas under attack from Russian troops; many oncologists and other specialists have stayed behind to help cancer patients.

According to Ukrainian doctors, the situation with medicine is actually not so bad; many hospitals still have most of the medications they need. That’s thanks to support from charities, pharmaceutical companies, and the fact that medical organizations have begun sharing records. The patients at the greatest risk are the ones who were participating in clinical trials and taking medications that haven’t been released to the market yet, but pharmaceutical companies have worked with many of them to continue treatment.

Still, the situation is far from perfect. Because of the myriad difficulties, even in areas where patients can get help, doctors are choosing chemotherapy regimens that make it easier to monitor for adverse reactions (even remotely). Due to power outages, the National Cancer Institute was not providing any radiation therapy until recently. Doctors have also started doing fewer surgeries that require long hospital stays and intensive care. In fact, the number of cancer-related surgeries in general has decreased — in part because there’s an urgent need for surgical interventions among the war dead. In addition, it’s currently not possible to conduct bone marrow transplants in Ukraine from unrelated live donors because donors (who often come from abroad) are unable to enter the country.

Even during peacetime, cancer treatment interruptions are sometimes necessary — for example, if a patient’s condition deteriorates during the course of chemotherapy. The general consensus among doctors is that these pauses don’t have a significant effect on treatment outcome. Nonetheless, patients in these situations need special care and treatment to reduce the risk of infection and help their bodies deal with adverse reactions.

Even radiation therapy must be interrupted sometimes, and nobody knows exactly how interruptions will affect the treatment’s effectiveness. For example, some studies have indicated that a two-week interruption has a significant (and negative) effect on the treatment’s outcome. Postponing surgery is also sometimes impossible without additional risks.

The most effective treatment for cancer usually consisted of high-quality medications, a well-designed treatment plan, modern diagnostic equipment, and care from competent medical professionals — if a patient is suddenly forced to go without any of those things for an indefinite period, the risks are obvious. Also obvious are the risks of evacuating patients from Ukrainian hospitals: according to a hematologist from Mykolaiv, they include “treatment interruption, separation from one’s family, a disruption of diagnostic continuity, and the shelling of evacuation convoys.”

Since the beginning of the war, Ukrainian oncologists have been contacting to oncologists from other countries and asking them to help get patients transferred abroad. According to a number of doctors, this has required a massive amount of time and energy.

After the war began, children with cancer were evacuated from Kyiv and other cities to western Ukraine and abroad fairly quickly. One challenge organizers faced was the transport of children who had recently received bone marrow transplants, a relatively risky surgery. To help send children to clinics in Europe and North America, the SAFER Ukraine project set up a center called The Unicorn Clinic. According to pediatrician Anna Sonkina-Dorman, who workers with SAFER Ukraine, more than 1,000 patients have been registered for the project, and more than 600 have already been evacuated from Ukraine.

At The Unicorn Clinic, children are assigned to volunteer doctors from various countries (they currently have a particular need for children’s oncologists to come to Poland for two-week shifts).

Doctors in Western countries who have been seeing patients from Ukraine have pointed out that even in the best cases scenarios, patients are arriving with their documents in Ukrainian. Sometimes, they arrive with no documents at all, and patients’ parents have no idea what medications were previously being used in their children’s treatment, nor what their radiation therapy regimen looked like. Usually they have neither CAT scan results nor tissue samples for study. In addition, sometimes the treatment a child has undergone in Ukraine is not used at all in the new country. The studies and tests doctors have performed in Ukraine don’t always inspire confidence; sometimes they have to be redone, leading to a change in diagnosis and treatment. It’s important to note that Ukraine has some of the highest children’s cancer mortality rates in Europe.

“The other problems we’ve faced have had more to do with culture than with medicine,” wrote a group of Italian doctors who have been accepting Ukrainian patients since the beginning of the war. “For example, our patients have had unexpected difficulties adapting to Italian food — especially the food they serve in hospitals (some patients have even developed gastrointestinal problems).” They’ve faced other logistical issues as well; for example, hospitals have been unable to discharge some patients because the patients have nowhere to go.

In addition to all of these issues, Russia’s invasion has created a more general problem for Ukrainian cancer patients: it’s difficult for various countries’ healthcare systems to cope with the sudden influx of new patients.

Though The Unicorn Clinic has created an effective pathway for children to resume treatment quickly, there’s nothing analogous for adults. The majority of Ukrainian adult cancer patients have remained in Ukraine, putting an immense strain on the clinics in the country’s west. Most of the adults who do go abroad are women with breast cancer and older men with prostate cancer (two fairly widespread diagnoses); younger men are not allowed to leave the country at all.

Cancer treatment facilities in neighboring countries are often unprepared to take in Ukrainian patients. In late March, WHO Emergency Committee member Richard Sullivan pointed out that even a hundred new patients had been a major burden on Moldova’s healthcare system. Now, according to Ruslan Baltaga, director of the Oncology Institute in Chișinău, who spoke at a WHO conference on April 26, patients from Ukraine are waiting in line alongside Moldovan citizens — and some of them have paid to go to Turkey to receive quicker treatment. In Poland, the number of cancer patients is expected to increase by 10 percent — a difficult adjustment even for a relatively rich country’s healthcare system.

On the other hand, the situation in some countries is far more favorable; the main problem in those countries is that patients don’t know there are resources available. Information about what countries are best for Ukrainian cancer patients can be found by calling special hotlines or by calling dedicated organizations.

At the moment, patient evacuations, treatment, and even patients’ living expenses are often covered by charities and various countries’ governments. It’s clear, however, that this won’t last for long, and so what will happen next to the Ukrainian cancer patients being treated abroad is an urgent question. That’s one of the reasons Ukrainian doctors are trying not to send patients abroad unless absolutely necessary. Sooner or later, all of these patients will be forced to return to Ukraine, where it may be difficult for them to finish the treatment they started abroad (for example, if the medication they took abroad is unavailable in Ukraine).