A new study from Tel Aviv University and the Weizmann Institute revealed that over the last 20,000-50,000 years birds have undergone a major extinction event, inflicted chiefly by humans, which caused the disappearance of about 10%-20% of all avian species. According to the researchers, the vast majority of the extinct species shared several features: they were large, they lived on islands, and many of them were flightless. 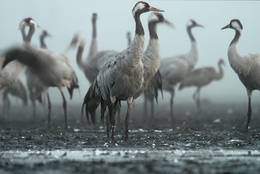 The study was led by Prof. Shai Meiri of the School of Zoology at the George S. Wise Faculty of Life Sciences and the Steinhardt Museum of Natural History at Tel Aviv University, and Amir Fromm of the Weizmann Institute of Science. The paper was published in the Journal of Biogeography.

Prof. Meiri: "We conducted a comprehensive review of scientific literature, and for the first time collected quantitative data on the numbers and traits of extinct species of birds worldwide. Those that became extinct in the last 300 years or so are relatively well known, while earlier species are known to science from remains found in archaeological and paleontological sites worldwide. Altogether we were able to list 469 avian species that became extinct over the last 50,000 years, but we believe that the real number is much higher."

The researchers think that the vast extinction was caused primarily by humans, who hunted the birds for food, or by animals brought to islands by humans - that fed on the birds and/or their eggs. This assumption is based mainly on two facts: First, the greater part of bird remains were found on human sites, apparently belonging to birds consumed by the inhabitants.  Second, in most cases the extinctions occurred a short time after the arrival of humans.

The researchers also found that extinction was not random, as most extinct species shared three major features:

Prof. Meiri: "Our study indicates that before the major extinction event of the past millennia, many more large, even giant, as well as flightless avian lived on our globe, and the diversity of birds living on islands was much greater than today. We hope that our findings can serve as warning signals regarding bird species currently threatened with extinction, and it is therefore important to check whether they have similar features. It must be noted, however, that conditions have changed considerably, and today the main cause for extinction of species by humans is not hunting but rather the destruction of natural habitats."